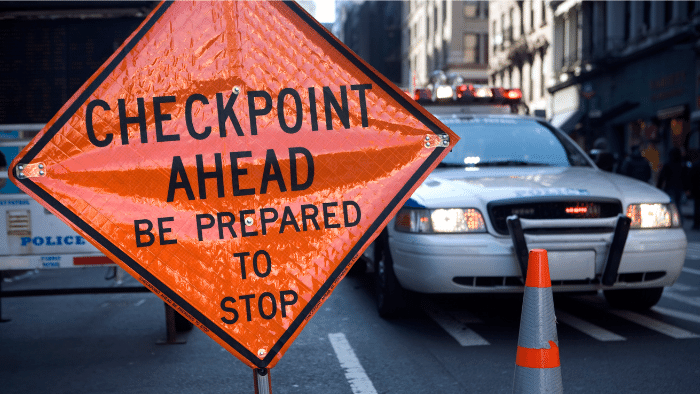 It is well-known that law enforcement officers must respect all motorists’ rights. Unless they have probable cause or reasonable suspicion that you have violated the law by speeding, driving dangerously, ignoring traffic lights, or swerving, they have no reason to stop you. Many people think that DUI checkpoints are contrary to this standard rule.

For the last seven years, Arizona State has experienced a rise in impaired driving accidents. Moreover, the Blood Alcohol Content (BAC) of those charged has been increasing (up to 0.15%). As a result, the Arizona government has embraced DUI checkpoints to combat impaired driving alongside other law enforcement agencies.

What Is a DUI Sobriety Checkpoint?

A DUI checkpoint, also referred to as a DUI sobriety checkpoint, is a law enforcement method used to test drivers’ intoxication. Their primary purpose is to seek out motorists driving under the influence of alcohol and drugs or engaging in other criminal activities.

When and Where Can You Expect to Find a DUI Checkpoint?

DUI checkpoints in Arizona are usually set up at intersections and during those times when drunk driving is more common, like at night, on holidays, and on weekends.

Law enforcement officials must publish in the local newspaper when and where they will establish the checkpoints. You can also watch the local morning news to keep up with the checkpoints’ positions. Also, many websites post the exact places of checkpoints in Arizona. You only need to check the areas along the path to your destination for updates.

How to Act if Stopped

When stopped at a roadblock, the police officer will ask you to show your registration and driver’s license. This is a legal request at any checkpoint. You might also be required to show your residential information and routine ID.

However, you should be aware that those are not the only items the officer is interested in. They are also monitoring your behavior, attitude, reaction, and ability to coordinate in the process of providing the documents. While part of their investigation at any stop is to observe any impairment cues, some signals may be mistaken for medical conditions, anxiety, fatigue, and other circumstances.

You have to comply if asked to step out of the car or pull aside for further questioning; failure to do so can result in being charged with other criminal offenses like disorderly conduct.

If the officer suspects that you are driving under the influence, he or she may instruct you to participate in a Field Sobriety Test (FST). Under the laws of Arizona, these tests are not mandatory. In other words, you can refuse the FSTs politely. The police officer asking the driver to participate already suspects the driver is guilty of drunk driving. That can explain why these results are often inaccurate, and even unimpaired drivers may not pass.

Besides, the officer may also ask you to take a breath test. Though there are civil consequences, you can refuse to accept the breathalyzer test too. However, you might lose your driving privileges for one year, and your refusal could be used against you during the trial.

Arizona has adopted the majority of the National Highway Traffic and Safety Administration (NHTSA) guidelines. Some of these guidelines require that officers have to stop vehicles in some type of mathematical order. They also require that the official checkpoint are decided in advance by county or city officials. But, in the end, police officers are the ones who determine whether a driver is a candidate or not. Sometimes, these decisions are biased.

While the safest way to avoid raising suspicion is not engaging in drunk driving, there’s no guarantee that you will escape false accusations or arrest. The officers will try as much as they can to engage you or your passengers in a conversation, especially if you are under 21 and they suspect you have committed a drinking violation.

First, the officer has no right whatsoever to question anyone but has a right to an interaction. However, they will take advantage of the interaction right to prompt you to talk and spill words that could incriminate you.

To avoid fumbling due to frustrations, always know where your registration and license are. Also, do not offer any information about your health conditions or any prescriptions you may be consuming. Sounds confusing, right? Always remember that however innocent the questions and the answers are, they may result in self-incrimination.

The best way to handle the whole situation may be to remain silent and tell the police officers politely you refuse to answer questions. The only questions you are required to answer are the ones about your name and address. You also have to provide the officers with your license, vehicle registration, and proof of insurance.

Being confident and aware of your rights during the process will reduce your false arrest chances.

All charges regarding impaired or dangerous driving in Arizona should be taken seriously. Convictions could lead to criminal penalties, including fines, loss of driving privileges, jail time, or installment of Ignition Interlock Devices upon restoration of your driver’s license, among others.

Going to court unrepresented will subject you to ruthless and cruel criminal prosecution. Make sure you reach out to a highly experienced and qualified lawyer to represent you. The lawyer will not only defend your rights but also ensure you’re treated justly. Besides, he or she may apply a specific DUI defense to your case that could lead to a positive outcome, including reduced charges and sentencing, no jail terms, or partial or total dismissal of charges.

The appropriate legal advocacy will increase your chances of a positive outcome. Always seek help to discuss your defense options in case of an arrest. Contact us today for a free consultation.